Civility might appear the last and least likely term to mobilise attention in the non-conformist realm of performance. But this call for contributions, prompted by discussions that took place as part of the symposium ‘Civic Centre: Reclaiming the Right to Performance’ recognises an expanded political vocabulary in recent work drawing on a set of previously discredited terms (see http:///www.civiccentre.org).  The concept of ‘friends and enemies’ proposed by Carl Schmitt as the founding antithetical relationship of the political, ‘fidelity to the event’ in the philosophy and writing on theatre of Alain Badiou, agencies of ‘welcome and intimacy’ in Alphonso Lingis’s sensual locating of human-animal action, Doreen Massey’s conception of the ‘stranger’ within and outside the city, and Richard Sennett’s engagement with terms such as ‘respect’ and ‘civility’ since he wrote ‘The Fall of Public Man’ thirty years ago, are part of this register. These writers point, at the very least, to an alternative way of conceiving of the much abused and banal ‘Other’ of identity theory and its attendant critical concept of ‘difference’ that once promised so much but seem to have delivered little beyond academic promotion. But do these categories resonate in the performance field?

Performance is unlikely to conceive of civility in its essentialist  mode of ‘manners’ (though a deconstruction of Ancien Regime customs of public formal display would be more than welcome) but rather is more likely to detect its interest in the term’s fruity overtones: the ‘sly civility’ that Homi Bhabha locates at the heart of the modern colonising imagination, the uncivil wars inherent in performance interventions that contest the suffocating normative frame of civility challenging its whiff of legality, politics of restraint, accommodation to difference and rule-following, through to the inherent Janus-faced duplicity of the theatrical mode such as Edward Albee’s stage direction in his Tony award winning play ‘The Goat’: ‘There is chaos behind the civility, of course’.

This ‘of course’ might serve as an invitation to ask why and what is at stake in the politics and performance of civility? Is civility, as Sennett once proposed, simply the capacity not to make oneself a burden to others? That would, at a stroke, characterise theatre as one of the more uncivil arts. Or might we expand the implications of the term with Rustom Bharucha who asks: ‘Why should the civility of theatre be immune to the political threats faced in the larger public sphere? What makes the theatre so special when other sites of social interaction in the public sphere are under attack? Should the civil be immunised against the contamination of the political? What if the civil is infected in its own right?’

These questions pertaining to the operations of theatre and its institutional contexts might be equally addressed to the liberal humanist obsequies of the expanded field of performance: the grace notes of musical appreciation, the courtesies of choreography, the host and guest niceties of installation and site- specific work. It is not that civility always brings with it an inevitable dark-side of the intemperate and intolerant (stupid!). Nor that it is bound to its ‘other’ (witness the studied anarchic and rude that groups such as the Wooster Group and Forced Entertainment have done so much to return to the civil realm, why else do they bow to us after we have endured all those apparent insults?). But rather how to hold on to the botched concept of civility for long enough to see the myriad ways current performance (from the lyrical ‘In Yer Face Theatre’ to the pestilential Gwynneth Paltrow’s Oscar acceptance speech, from the charming Stuart Brisley to the demonic Forster and Heighes) while protesting its radical qualifications continues to construct conditions for its polite perpetuation. That might be a question worth exploring (if you please – but if you can’t be arsed, don’t bother!).

To mix with papers developed from ideas originally presented at ‘Civic Centre’ and axioms from artists and academics we are looking for responses to the above concerns particularly from performance makers, artists. individuals and groups who suspect that performance experience is not sufficiently caught in the circulating simplifications of empathy and alienation, investment and boredom, nice and nasty and recognise civility as an unlikely circuit- breaker.

Reclaiming the Right to Performance

The Uncertainties of Dialogue

A Theatre of Civility

Spit Not in the Fire - the Art of Manners [artist's pages]

The Thing with Feathers

Impurity and the Postcolonial Subject

Thinking out of Time

Ethics of Voice: Interview with Claudia Castellucci and Chiara Guidi

The Strangers Beyond the Gates 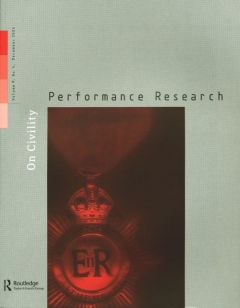 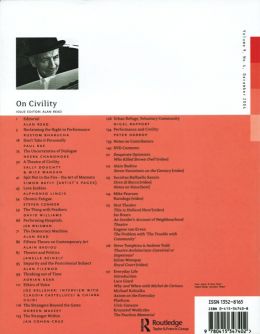